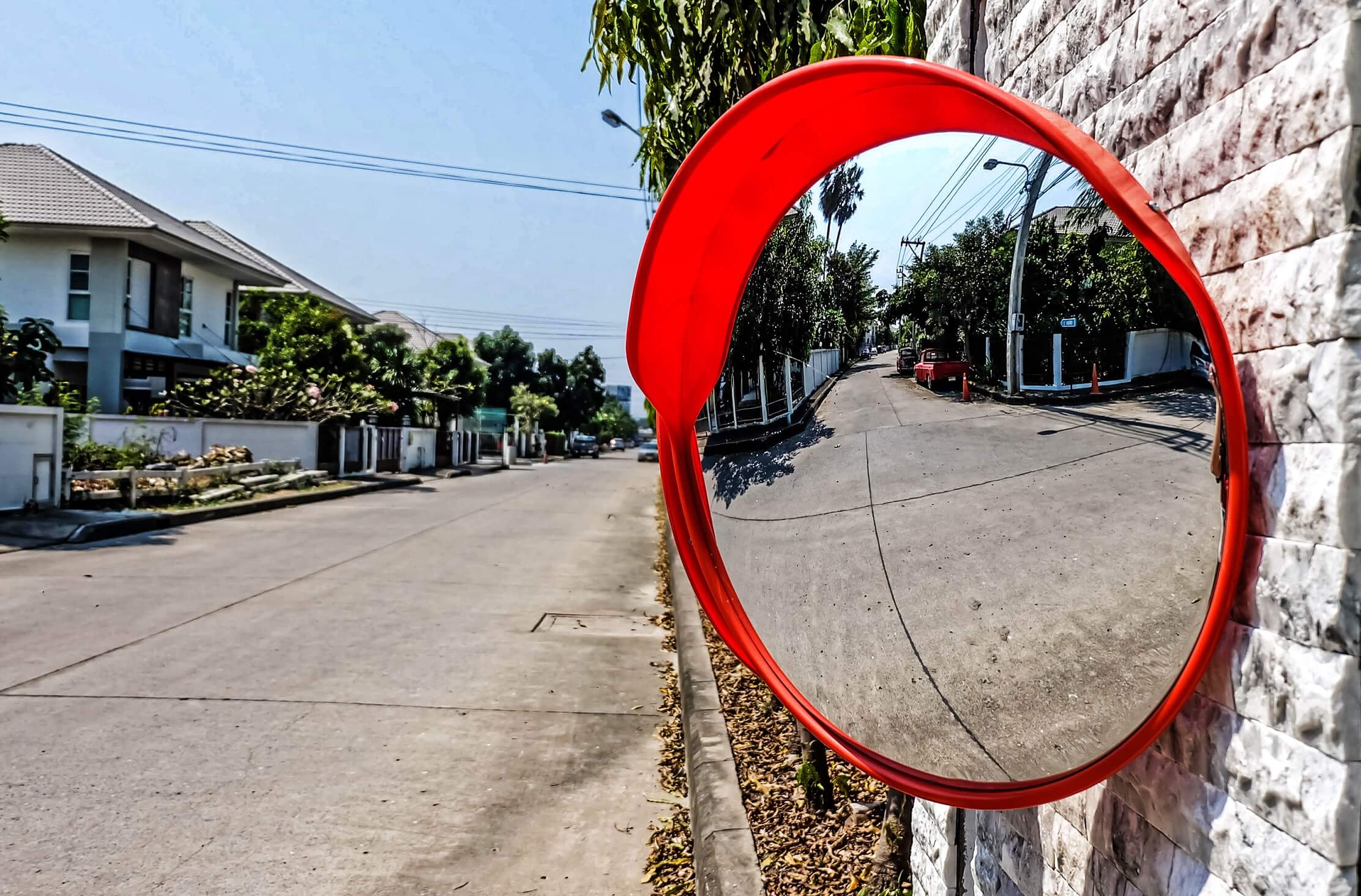 How Do Convex Mirrors Work?

Convex Mirrors or Diverging Mirrors are a Vehicle and Car Park Safety Mirror. The Convex shape of the reflective surface reflects light outwards, giving the viewer a wider area of view. Convex Mirrors are typically installed for driver Visibility, Security and Safety for both Vehicles and Retail Security. Plastic Convex Mirrors are popular in Australian parking lots because they provide a clear, wide-angle of view around blind corners. This allows a driver to see on-coming cars around corners which avoids accidents.

Typically, these mirrors are fixed to a wall or ceiling at intersections or abrupt turns in passageways. This removes blind zones and allows people to see their surroundings clearly. The convex mirror always creates a virtual image of the object, and the image created by the use of a convex mirror is always smaller than the actual object.

What are Convex Mirrors Used For?

A visibility issue in a certain high traffic area can often bring up several solutions by various parties.  Sometimes just trimming a tree can help solve the issue.  However in most cases to improve the visibility a good deal of major work is required.

Maybe even shifting driveways, doing earthworks involving moving a hill or straightening a road but the cost of all these works is high and we need to think of another way to solve this problem.  And this is where the hooded convex mirror can be placed in the correct place to provide an economical and fast alternative to the problem.  But theoretics argue whether or not they will work.

Besides parking lots, Convex Mirrors are also used in factories and loading zones, and are effective anti-theft devices. Because they reflect space that is invisible to the naked eye, they act as a deterrent and alert people to hazards around corners. Some of the other areas where convex mirrors are used include factories, loading zones, and other busy work environments. In some cases, they are even used for security purposes.

A convex mirror is used in large workplaces, stores, and hospitals to allow people to look around the corner and avoid colliding with one another. The Convex Mirror always creates a virtual image of the Car Park surroundings, and the image/vehicle view from the convex mirror is always smaller than the actual object.

Convex mirrors are more commonly utilized inside car mirrors than concave or plane mirrors because they have a larger visual field. The following are some of the most important and common applications of uses of convex mirror.

Care should also be taken when selecting the right type of mirror.  The Hooded Convex Mirrors are suitable for outdoor use.  They are durable, vandal resistant, low maintenance and weather proof in construction on the mirror face.

A convex mirror is used in large workplaces, stores, and hospitals to allow people to look around the corner and avoid colliding with one another. Because they can diverge light beams and create virtual pictures, convex mirrors are commonly employed as rear-view mirrors in automobiles and transportation.

Northpac Hooded Convex Mirrors cover all these points and come with the correct brackets for mounting. Convex mirrors are also useful on pedestrian walkways where the visibility is not good and can put pedestrians at risk of vehicles coming around bends.

Yes, they certainly do work.  Research in several countries does support this.  That convex mirrors make a considerable difference and are a very economical way to solve a situation where traffic can be put in danger from vehicles approaching on a blind corner. A lot of research exists around this issue. One report concludes that the provision of convex mirrors at concealed entrances allows drivers to pull out of driveways safely.  One Researcher from the Transportation Research Institute was concerned primarily with urban situations and the use of convex mirrors at intersections.

The conclusion he arrived at was that the mirror appears as a device that enhances safety behaviour and can be recommended as a traffic aid. Another research states that traffic convex mirrors are highly recommended in accordance with ergonomic guidelines.

Research by the Australian Transport Department recommended convex mirrors to be installed at locations where the lateral visibility and sight distance is poor. Such as T-junctions, concealed driveways, acute bends on narrow roads or hairpin bends in mountain passes. Parking areas with unsafe exit driveways and approaches to skewed railway level crossings to name a few.

The indoor Convex Mirrors are possibly the most cost effective deterrent against shoplifters and also collisions in the workplace can be reduced where these indoor mirrors are installed. They eliminate blind spots and hard to see areas and allow your staff to monitor customers very inconspicuously.

Flexible Convex Mirror Reflective Panels are 200x Times Stronger than Glass, as they bend instead of smashing. This makes them a great option for Anti-Theft, Anti-Vandal Shops and Roads.

They reduce accidents in corridors as well as reducing security risks in reception and other retail areas. The bended mirror panel has a wide angle view which makes them ideal for wide and open areas and can be set above aisles and shelves.  The indoor convex mirrors can also be adjusted to suit whatever angle is required to allow the maximum line of sight.

Convex Traffic Safety Mirrors are a cost-effective option and more economical than straightening a road or moving a hill.

‍
Flexible, Plastic Convex Mirrors simply provides an effective visual safety aid for drivers, and a cheap and Tamper-Proof Interior Security option for shops. Convex Mirrors can be installed without a professional contractor in most cases and create an additional safety measure inside and outdoors.

Compared to electrical security cameras or flashing traffic lights to aid drivers around blind corners, Convex Mirrors are only a fraction of the cost and can be replaced straight away if needed.

Get exclusive offers, new product announcements and the latest news from Northpac.

Thanks for joining!
Oops! Something went wrong while submitting the form.
Contact
Australia
Call us: 1800 143 194